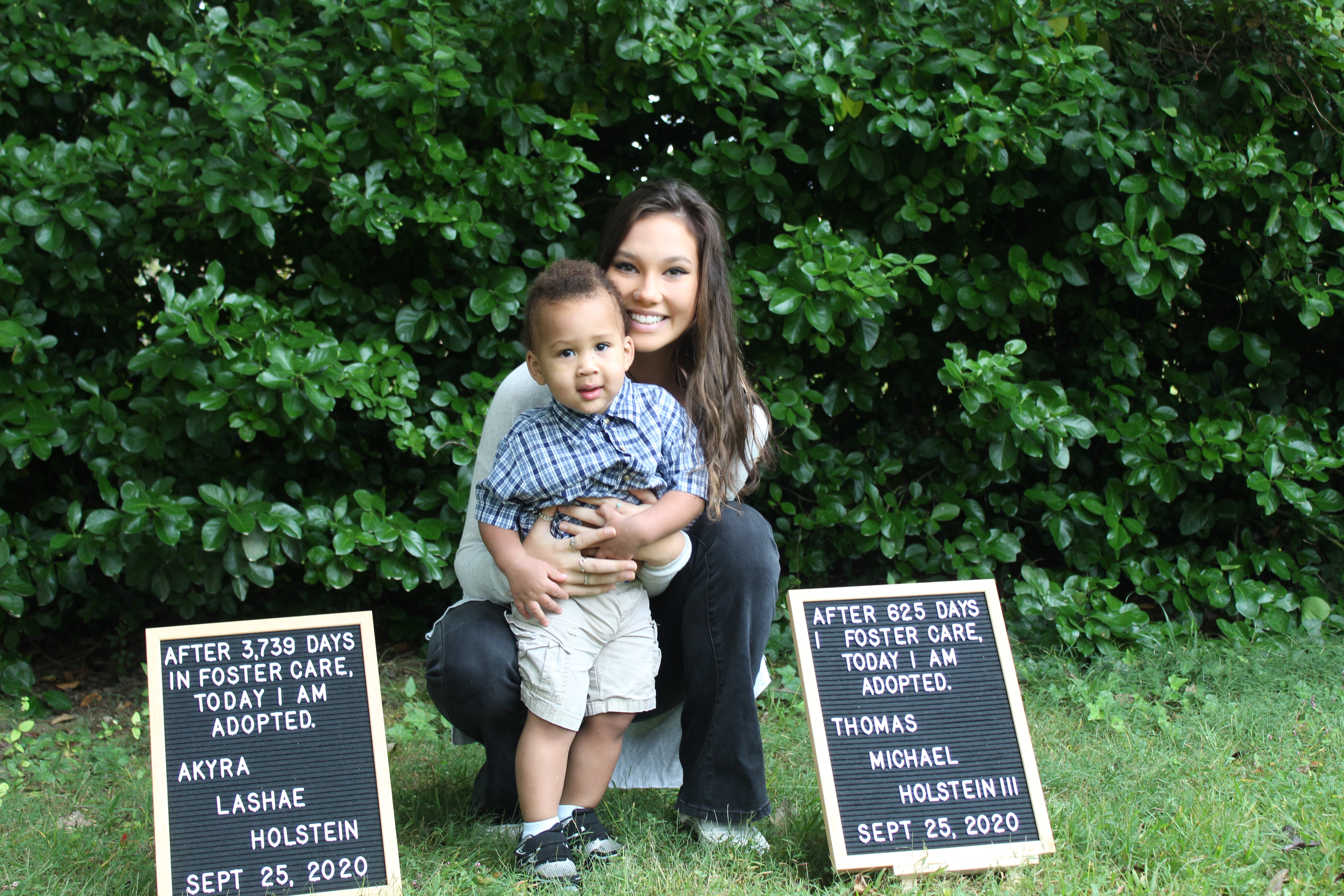 November is National Adoption Month and Aura is celebrating by featuring the unique stories of adoptive families across the country. Today, we hear from the Holstein family. The following post was written by Katie Holstein.

With Thanksgiving around the corner, something I’m grateful for is permanency. Knowing in the eyes of the court we’re legally a family forever. No changes. No take-backs. No exceptions.

I always knew I wanted to adopt eventually, but I figured I’d end up fostering for a while before the opportunity came up. The goal of foster care is always reunification...until it’s not an option.

Thomas, or Tiny as we call him, came to me as an infant. Due to his mother’s history I was asked up front if I would be open to adoption, which is incredibly rare in foster care. The pandemic caused a bump in the plans, as courts were closed for a while, but after 20 months it finally became official. And I couldn’t be happier.

Tiny is...wild. There’s no other way to describe him. He is constantly on the move, has a mean side-eye when he doesn’t get his way, and is 100% a momma’s boy. He stole my heart the second they placed him in my arms, and we’ve been inseparable ever since.

Akyra, nicknamed Okra, was a complete surprise. I wasn’t originally open to teens. At the time I had four little ones, but my favorite social worker called asking if I’d be willing to weekend respite (when a foster family temporarily cares for another family’s foster child.) I said yes, and we just clicked. We did respite for her several times over the next year before she finally came to me permanently. Six months later, on September 25th, 2020, three days before her 17th birthday we made it official. She and Tiny became Holsteins for life!

Okra is a typical teen. She lives to hang out with her friends, is glued to her phone, and tolerates school. But honestly, I love it. I love that after a decade in foster care she has the chance to just be a normal kid. She’s so brave and is one of the most courageous kids I’ve ever met. And such an amazing big sister. Having three younger siblings is always an adventure, but she never hesitates to help with bath time or homework and is literally my saving grace some days.

I’m happy that my family and I can make fun memories together. This past October, we went to the pumpkin patch. Tiny and Okra were newly adopted. The whole family together. We went to the petting zoo, ate fun snacks, took some awesome pictures, and picked out pumpkins to carve. It was one of the first times in three years of fostering that I felt like just a normal family out and about.

My advice for families that are considering adoption is to be realistic about the process. Adoption is a beautiful thing, but it’s also challenging. No matter if you get a child at birth or a child who has spent a decade in the system, there will be trauma. Be prepared for everything that comes along with adoption. You have to be willing to navigate the hard stuff.

Adoption is an incredible privilege and it’s our responsibility as parents to do everything we can for our children.