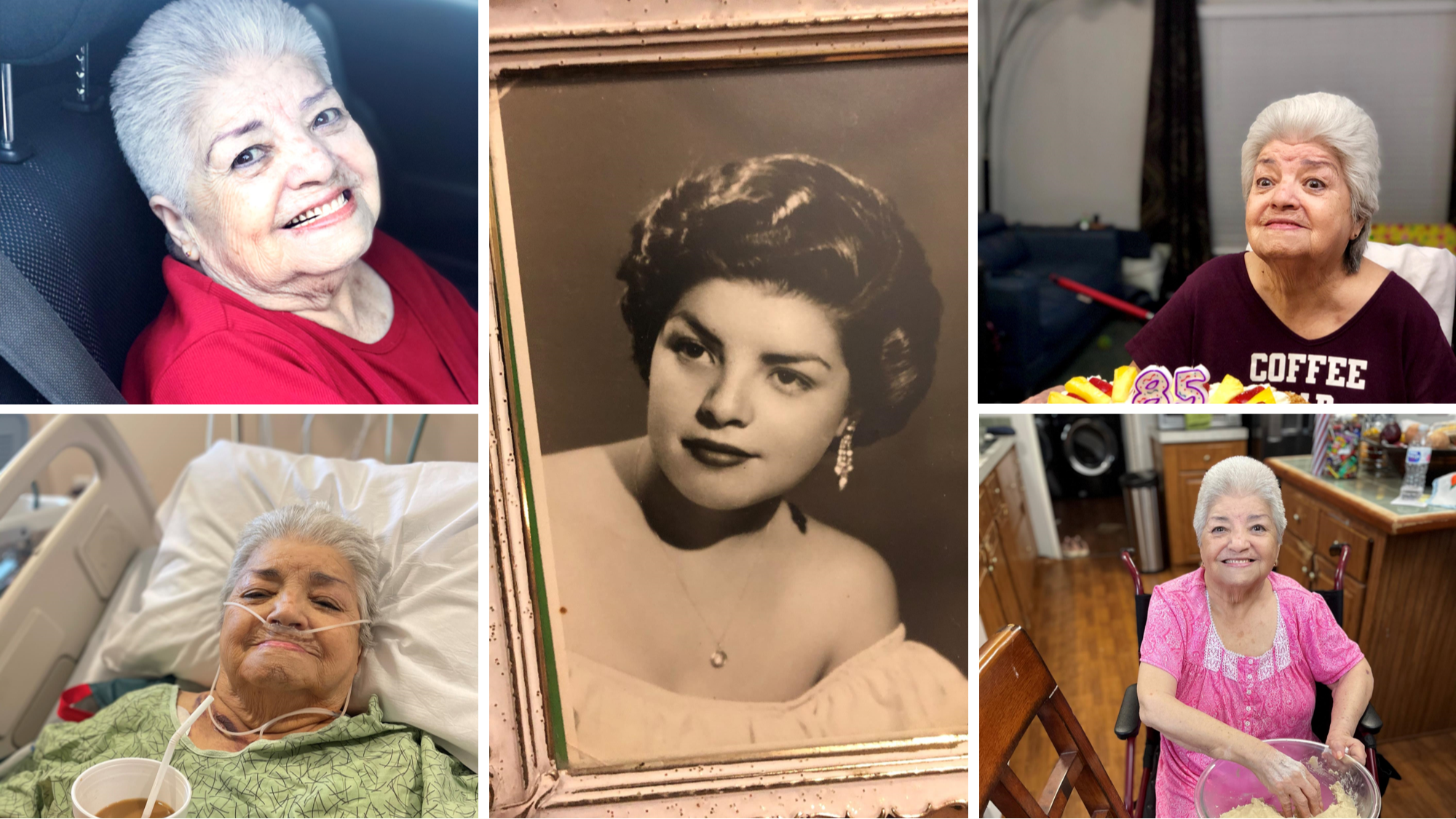 Meet Margarita Ditch: 3rd Place Winner, Do It For the Gram

Margarita Ditch (nominated by her granddaughter Diayane Aguirre), is one of three Granfluencers crowned 3rd place winner of our Do It For the Gram contest.

Margarita Ditch is living proof that laughter is the best medicine.

As a 10-year cancer survivor, she inspires those around her to never give up and always keep a positive attitude. After immigrating to the U.S. from Mexico at a young age in the 1950s, Margarita started her own business for wedding dress rentals and alterations, putting her fashionista skills to great use. She is a symbol of courage and resilience, always inspiring others to make the most out of life by doing what you love.

It’s Saturday and Margarita Ditch is watching some of her favorite television shows with her son George Aguirre and knitting items for her five grandchildren and five great-grandchildren.

Nowadays, she is hard-of-hearing and her son George serves as her full-time caregiver, something that she treasures more than anything. The two sit down together often to talk and watch television, and of course catch up with what’s going on with the rest of the family.

But before these two reunited, which would be decades in the making, Margarita had to make some very brave and hard decisions in order for George and the rest of her family to have a better life.

At just 18 years old, Margarita immigrated to the United States, leaving behind everything she knew. It is one of the key reasons why her granddaughter Diayane Aguirre nominated her abuela for Aura’s “Do It For the Gram” contest.

“My grandma is already an influencer to those around her,” said Diayane. “Immigrating from Mexico to the U.S. in the 1950s, she had the drive and courage to start from nothing and ended up co-owning a small business in California as a woman entrepreneur of a wedding dress rental and alterations store.”

For Diayane, her 87-years-young abuela serves as a constant reminder to live life to the fullest -- while keeping a wicked sense of humor about it all.

“What’s most inspiring is her way of living and making the best out of the hardest things, like her medical struggles, with her laughter,” said Diayane.

After winning her fight against cancer 10 years ago and becoming a survivor, Margarita has always kept a positive attitude and enjoyed her hobbies of sewing, crocheting, and baking.

Even today, Margarita says that her hands often hurt from all of the knitting she does for the family.

“I like to knit blankets and sweaters -- and Diayane gets all of them,” Margarita laughs.

Margarita prefers to speak Spanish and often uses her son George to help translate and communicate through her hearing impairment. But even through some of the communication barriers, her firecracker personality shines through.

George is her only child. Being away from him after immigrating to California was one of the most challenging times Margarita had to face as a young mother. It would be decades before the two would fully reunite, with Margarita eventually moving back to Mexico to be with her family again.

It was initially a friend who asked her to come to California for a visit. Once there, Margarita started working and making her own way, eventually carving out a path toward entrepreneurship.

“It was difficult for her and she was sad quite a bit,” said Diayane. “She had left her mother in Delicias, Chihuahua and was in California all by herself. Her friend went her own way, so she started working and doing things for herself but when she got paid she was glad because she was able to start sending money to her family back home.”

Soon after, Margarita started sewing then later on got married, and eventually started an alterations business with ther husband in San Diego. Over the years, Margarita would go back-and-forth between Mexico and California to visit her son and the rest of her family. Decades later, they sold the alterations shop, retired, traveled, and went back to Mexico.

“My dad was glad that she went back to Mexico to live, he was older and had kids of his own by then,” said Diayane. “My abuela felt so joyful and so comfortable finally being back home. She was happy to know that they were going back to Mexico to stay and to live, and to set roots there.”

It was Margarita’s bravery, resiliency, and her work ethic that allowed those same roots to flourish for generations to come.

“I used to do everything back at the store, anything from making the tuxedos, measuring people, making dresses, sewing them, I knew how to do it all,” said Margarita. “It was something I enjoyed doing.”

Margarita said that before becoming a mother, two of her favorite things to do were going dancing and riding horses. She has always been into fashion, sewing, and knitting and that is something that is not stopping anytime soon.

When asked about her granddaughter Diayane, Margarita smiled widely and said, “She is precious and charming, like a flower, and I love her so much.”

After reading about “Do It For the Gram” from one of Aura’s emails, Diayane knew the contest was perfect for her abuela.

“She inspires me to make the most out of life by always loving her family and doing what she loves,” said Diayane. “I wish to be half as funny as she is when I reach her age. My grandma has taught me that humor and laughter can make a big difference even in the most difficult times, like when she was in the hospital.”

Margarita’s courage and tenacity, even at a young age inspires all those around her to go for their dreams and passions in life. Living life to the fullest isn’t just a phrase for her, but an actual testament to her story of never giving up even in the face of uncertainty.

“Life has taught me many things and I’m living to be able to be there and to provide for my son and grandkids,” said Margarita.

When asked what she desired most for her son, grandchildren, and great-grandchildren’s futures, it came down to just one word: money.

“Lots of money,” Margarita laughed. “And to have them close to me.”

As our 3rd place winner, Margarita will receive six Carver frames for the family.

Stay up to date on the latest news and exclusive discounts.