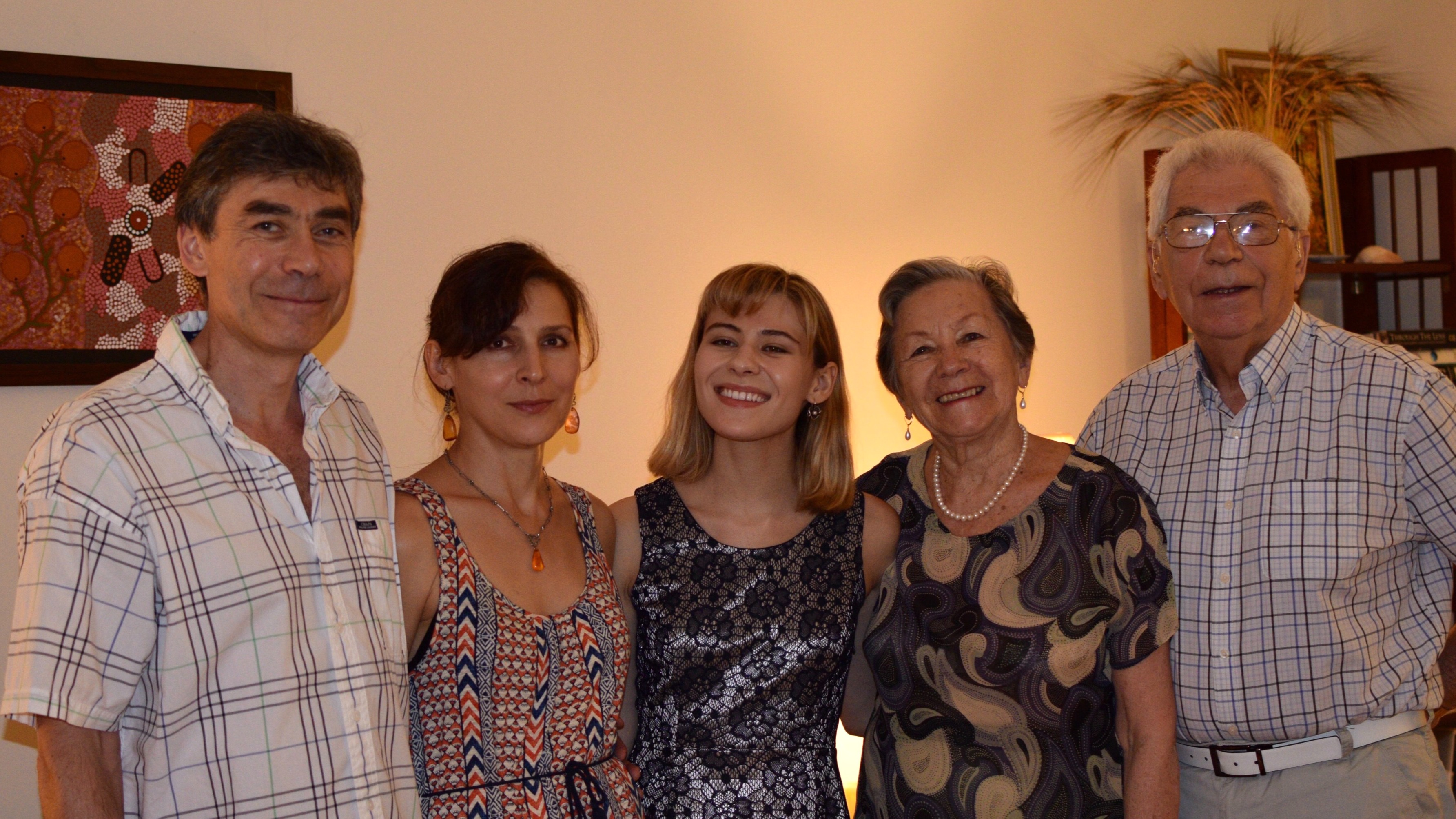 Meet Albina Feygelson: 2nd Place Winner, Do It For the Gram

Albina “Alla” Feygelson (nominated by her granddaughter, Masha Feygelson), has been crowned 2nd place winner of our Do It For the Gram contest.

Albina Feygelson is a true survivor.

After living through the German invasion of Russia, growing up in an orphanage, and ultimately studying medicine and becoming a doctor, she makes happiness look effortless. Mrs. Feygelson proves that strength, love, and — perhaps most importantly — hope, come from within.

Albina “Alla” Feygelson and her husband Nikolay still do the same thing every Saturday morning.

Alla usually makes breakfast before a caretaker takes them both to the park where they take walks and play one of their favorite card games Gin Rummy.

“It’s pretty even,” said Alla after her granddaughter Masha helps translate to her native Russian.

The two exchange a look, and Masha presses Alla a bit more on the question.

Alla then admits, “I play better.”

Her Saturdays now remind her of how far she has come from her journey of survival during World War II.

“My grandma's childhood is one of the most harrowing stories of survival that I have ever heard but you'd never know it by looking at her,” said Masha. “She makes happiness look effortless.”

In 1941, in the midst of the German invasion of Russia, a nine-year-old Alla found herself completely alone in the city of Abakan, Siberia. Her father had been killed in action and her mother fled the city.

In the hopes of being reunited with the only other family she knew, Alla traveled over 1,500 miles from Siberia to Tashkent, Uzbekistan, to find her grandparents. Although she found them, sickness and starvation took them soon after her 10th birthday.

Alla was on her own again, attempting to survive by working for food and almost dying of starvation herself. She eventually found an orphanage to take her in, and stayed there until she finished high school. Despite having missed years of education she caught up, graduated school with top marks and went on to study medicine in college.

Alla became a doctor with a specialty in ophthalmology and would go on to meet and marry the love of her life, Nikolay.

“I nominated my grandmother for ‘Do It for the Gram’ because she’s an incredible person,” said Masha. “The travels that she went through as a kid in the middle of a war is mind-blowing and she then grew up to be this radiant, beautiful, happy person. Like, you can never tell that she grew up in the middle of World War II.”

Masha said that as  a child in wartime, her grandmother's strength saved her, but so did the strangers who helped her along the way, especially the people who believed in her.

“It instilled in her a faith in the goodness of human beings, even in the darkest of times, and she's always given all she had to offer to those around her,” said Masha.

Although times were incredibly hard and Alla was essentially a homeless kid from the streets, her upbeat personality and unwavering optimism has always made her focus on the positives in life.

She understood how important it was to get an education and wanted a good job where she could help people, similar to how others helped her.

“One of her main caretakers at the orphanage encouraged her to think about becoming a doctor when she was of high-school age,” said Masha. “It fit her personality. She loves to work with people and loved being a doctor.”

Alla was a family doctor first but it was a very active job where she was often on her feet and walking. She developed some painful joint issues and needed something more stationary, so she became an eye specialist and worked as an ophthalmologist for 35 years.

Masha heard about the Do It for the Gram contest from her father Boris, who thought it would be a great idea for his mother Alla.

“It’s very funny, we got my grandparents the Aura frame last year for Christmas and my dad was getting emails from them, and he sends me the contest info and he’s just like ‘Hey, look at this. Check this out,’  and I was like ‘Oh, that’s cool,’” said Masha. “I love writing and I love my grandmother so I said let’s try it. I’ve never done any contest or anything of the sort but it’s the best kind of contest, to be able to tell her story like that.”

According to Alla, the best part of being a mother and grandmother came when Masha was born.

“The best moment was when my only granddaughter was born because I only have the one,” said Alla.

As Alla and Nikolay’s only grandchild, Masha is extremely close to both her grandparents but especially her grandmother. She particularly loves the unusual but wise advice her grandmother gives her like the following:

“To know a person, you must eat 35 pounds of salt together.”

"Even a shack is heaven with the one you love."

“She’s young at heart and it’s a cliche but people like her are perfect examples being that she will be 90 in January,” said Masha. “She makes lifelong friends and I think that’s something she’s found to be super important because when you grow up alone as a kid, you really value the bonds you create with other people.”

After first meeting Nikolay 65 years ago in a children's sanitorium during a summer stint in college, the two became inseparable. Alla was 24-years-old and Nikolay was 25, and he has been the family photographer ever since, often taking photos of Alla during their trips to the countryside.

“So much of my grandparents' beautiful life together is captured in photos -- many taken by my grandpa -- and my grandma's incredible personality is tangible in each and every one,” said Masha.

Despite growing up during WWII and feeling the after effects of the war in her adult life, Alla still built a life with Nikolay full of fun and adventure.

“At the time it was difficult and people were working a lot trying to survive after the war but we always had a lot of fun,” said Alla. “We were very outdoorsy and would always go out to the country every weekend.”

The couple lived in Latvia, located in northeastern Europe and would venture to the countryside to go hiking and pick wild mushrooms and berries. They also had a summer house they built together, and once retired, would spend all of their time there.

“I wanted to see the world and wanted to travel,” said Alla.

Before Nikolay had a stroke about five years ago, they took a trip to the Carribean, and although they have been living domestically in the U.S. since, they have racked up quite a few stamps on their passports.

Over the years, the couple has traveled all over Europe, China, Spain, Germany, Israel, Czechoslovakia, Bulgaria, and Mexico, just to name a few.

“Even at 85 they were still very active, by the way without us and without their kids,” Masha laughed. “They always took their own trips and were always perpetually traveling.”

Masha remembers visiting her grandparents in Latvia as a child where they would always have a “small” group of about 40 friends over and throw big parties.

Although things have since slowed down, mainly with Alla and her husband moving to the U.S. at the age of 65, their social lives haven’t missed a beat.

“The level of social that these guys were on all their lives is mindblowing to me,” said Masha. “It was my grandfather’s birthday a few weeks ago and people were calling him all day.”

In this new chapter of their lives, the phone never stops ringing from friends and loved ones all over the world.

“A lot of my friends are gone now that we're older,” said Alla. “A lot of friends have passed but their children still call.”

Alla is more than happy to take their calls in order to stay connected to people back home and abroad. She also keeps in touch through her iPad that Masha helps her with, and looks forward to continuing the adventure with Nikolay.

“My grandmother is living proof that strength, love, happiness and—perhaps most importantly—hope, come from within,” said Masha. “Proof that you can survive the world falling apart around you and be reborn to build the life you dreamed of.”

As our 2nd place winner, Alla will receive $2,500 and three Aura Carver frames for her family.